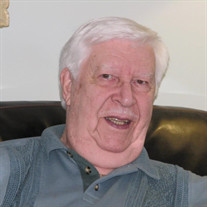 GIRARD, Gabriel “Gabe” passed away peacefully in his 100th year at Camp Hill Veterans Building in Halifax on Tuesday, November 23, 2021. Born in Ontario, he was the son of the late Wildfred Donat and Josephine (LaFontaine) Girard. Gabe was predeceased by his devoted wife Auréade (Falconer). He was also predeceased by daughter Auréade, and son Marc. He is survived by his son Paul (Miriam), daughter Anne (Shawn) and their children & grandchildren, as well as his siblings, nieces and nephews. Gabe spent most of his life in Quebec and Ontario where he and his late wife Auréade raised Paul, Auréade, Marc and Anne. He had a long and successful career with Sears in their Human Resources department. Outside of his professional life, he was an avid tennis player, cribbage player, traveller, kite flyer, joke teller, and lover of Montreal smoked meat. Struck with a touch of wanderlust at the young age of 91, Gabe made his way to the Maritimes to spend some time with family and friends on the East coast (although we strongly suspect that being near the freshest lobster possible was the real draw). No one enjoyed good food as much as Gabe, after every meal there would always be a resounding “Compliments to the chef!”. As much as he enjoyed a feast, he truly enjoyed the company of friends and family even more. He made friends everywhere he went and never forgot a face. He truly was the life of any gathering he attended sharing his very corny jokes, his laughter and his wisdom with an always captive audience. If you met him you did not forget him, with his signature purple streak in his head of white hair, the single diamond earring, bright colourful sweaters and most importantly his expressions of genuine gratitude and joy when surrounded by people he cared about. No donations or flowers, please enjoy your favourite meal in his honour and don’t forget to pass on your compliments to the chef. Cremation has taken place, and a private family interment will take place at a later date. Expressions of condolence may be made at https://www.harboursidecremation.ca/

GIRARD, Gabriel &#8220;Gabe&#8221; passed away peacefully in his 100th year at Camp Hill Veterans Building in Halifax on Tuesday, November 23, 2021. Born in Ontario, he was the son of the late Wildfred Donat and Josephine (LaFontaine) Girard.... View Obituary & Service Information

The family of Gabriel "Gabe" Girard created this Life Tributes page to make it easy to share your memories.

GIRARD, Gabriel “Gabe” passed away peacefully in his 100th year...

Send flowers to the Girard family.