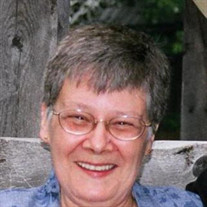 Jane “Janie” Penelope (Wigglesworth) Snailham It is with profound sadness that we announce the death of Jane “Janie” Penelope (Wigglesworth) Snailham, Halifax NS, who passed peacefully on Sunday, October 24, 2021 Born in Liverpool in 1941, Janie was involved in school and church activities while growing up. After graduation from Liverpool Regional High School, she entered the Grace Maternity Hospital Nurses Training program in 1963. In 1964 she married William “Billy” Snailham. Janie worked at the Grace until 1967, when she and Billy were blessed with the birth of their only child, a son Scott Andrew Frederick. He was the light of their lives. In her later years, Janie’s passion was supporting the Canadian troops on their many overseas missions, beginning her “writing campaign” in 1992, and in 1998 a collection of letters she received from Canadian troops was published in a book “Eyewitness To Peace” by the Canadian Peacekeeping Centre. She was very proud in 2007 when the letters from “her troops” were accepted as a collection at the Canadian War Museum, with the rest of her letters added to the collection in 2011. In 2008, Janie was also honoured to receive the Canadian Forces Medallion for Distinguished Service from retired General Rick Hillier in recognition of her continuous support of “her troops”. Janie was the last surviving member of her immediate family. She was predeceased by her husband, Billy Snailham, her parents Mildred Mae and Armand Wiggleworth, and her sister Joanne. She is survived by her son, Scott Snailham and daughter-in-law, KellyAnne Beaton-Snailham, as well as two nephews. In her memory - please hug your loved ones, smile at a stranger, and take a minute to notice the blue sky, a bird in flight, the true beauty of the world around you. There will be no funeral at Jane’s request. In lieu of flowers, donations may be made to Hospice Halifax.

The family of Jane Penelope Snailham created this Life Tributes page to make it easy to share your memories.

Jane “Janie” Penelope (Wigglesworth) Snailham
It is with profound...

Send flowers to the Snailham family.