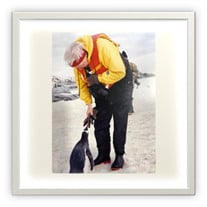 On Wednesday May 4, 2022, Jean passed away peacefully at Parklands Clayton Park at the age of 90. Jean was born in Ilford, England and earned a BSc in chemistry from Imperial College, London. A spirit of adventure led her to emigrate to Canada to take a position in a commercial laboratory. Realizing that she needed to learn to drive, a mutual friend arranged informal lessons with a dashing young English accountant at National Sea Products, who was “mad about cars.” Jean & Roger Digby Hartley, originally from Bristol England, were married and moved into a tiny basement apartment on Regina Terrace in South End Halifax. Not long after they were married, Roger suffered a brain aneurism in 1963, which would prevent him from ever returning to his career. Knowing she was now the breadwinner, Jean proceeded to earn an MSc in inorganic chemistry from Dalhousie University which she completed in 1969. Soon after, she became one of the very first lay teaching faculty (not a Sister of Charity) of Mount Saint Vincent University. She later moved into administration, becoming Registrar of the University. During her time as Registrar, she introduced the first computerized system in that area. She then moved to the department of continuing education, where she was Deputy Director and Director of Summer School for many years - a complex and often thankless task that nevertheless had to be done exactly right, every year. She also recruited faculty for, and scheduled, all of the early televised courses and played a key role in the development of the DUET televised learning program. Her final position at The Mount was as Assistant Dean for Academic Advising. In all her administrative positions, Jean was in direct contact with many, many students. They relied on her for good advice, and it was always delivered with her typical gentle kindness and concern. Jean was also a woman of passion - music, birds, orchids, but not cooking. She brought her scientist's mind to her pursuit of exotic birds and cultivation of orchids. They weren’t just beautiful flowers, they all had long Latin names and interesting histories. Jean knew them all. Jean was also adventurous. When Roger’s disability permitted, they took many trips together and later, alone, Jean visited Antarctica, circumnavigated South America, explored New Zealand and cruised through the arctic on a Russian icebreaker. Jean’s love of music, especially opera and most especially Wagner, led her to volunteer with Women for Music in 1996, serving as president from 2003-2005 and then as treasurer for many years . Her administrative skills were greatly appreciated as she helped organize the well-known book sales that raise funds for the Symphony Nova Scotia. She was a great supporter of the Symphony and had a great knowledge and love of music. She was given an Honorary Membership to Women in Music in 2016. Although Jean’s world shrank to her room and the gardens at Parkstone, the strains of a Wagner opera could often be heard coming from her room and she retained the liveliest interest in the world around her. Jean was truly a quiet and unassuming inspiration - to the many students she helped, to the colleagues she mentored, to the orchestra she supported and to the many who felt her warmth and friendship over her long life. When her father died, Jean dug up and smuggled back to Canada some bulbs from his bluebell patch. They thrived in her garden for many years and now their descendants thrive in a friend’s garden, a perfect remembrance every spring. Jean is predeceased by her husband on March 30, 2010, brother John Osborne and her sister-in-law Valerie Osborne. She will be missed by her niece, Claire Osborne (Ottawa) and her husband Alan Bent, Giles Osborne (Toronto, ON) and his wife Maxine Lewis and Mark Osborne (Dartmouth) and his girlfriend Adele Widgery. She will also be missed by her great nephews Graeme and Eric Bent (Montreal, QC), Ian Bent (Aylmer QC), and great-great niece and nephew Sofia and Luca Bent (Montreal QC) and Jacob Bent (Aylmer QC.) A private cremation has taken place. A gathering to celebrate Jean’s life will be organized in the summer. If you wish to remember Jean, donations to Symphony Nova Scotia or the Nature Conservancy of Canada would be welcome. The family is grateful for the compassionate care given by the many health professionals who helped with Jean’s continuing care over the past 5 years at Parklands Clayton park. Special thanks to Catherine Bent for all your help during the years. It was greatly appreciated by the family.

On Wednesday May 4, 2022, Jean passed away peacefully at Parklands Clayton Park at the age of 90. Jean was born in Ilford, England and earned a BSc in chemistry from Imperial College, London. A spirit of adventure led her to emigrate to Canada... View Obituary & Service Information

The family of Jean Mary Hartley created this Life Tributes page to make it easy to share your memories.

On Wednesday May 4, 2022, Jean passed away peacefully at Parklands...

Send flowers to the Hartley family.