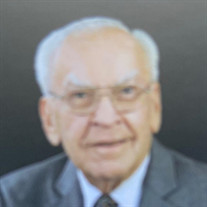 With great love and profound sadness, we announce the passing of John Betuik. John was born July 29, 1931, and passed away at age 90 on February 24, 2022 in Dykeland Lodge in Windsor. John was predeceased in by his wife of 40 years, Peggy (Rutledge) in 1992; as well as his parents and all of his siblings. John is survived by his best friend and companion of many years, Ena Pineo of Berwick, who is a loving part of our family; as well as by his children Judy (Danny) of Fort McMurray, Alta.; Robert (Kendra) of Lloydminster, Alta.; and Paul (Debbie) of Falmouth. He is also survived by six grandchildren; many great-grandchildren; one great great-grandchild; nieces, nephews; sister-in-law, and brothers-in-law. John was born and raised in Montreal. He met Peggy in Sydney where they married and after a few years returned to Montreal where they raised their family. In the early 1970’s John and Peggy moved back to the Maritimes. They first moved to Sydney where dad built the first miniature golf course in Nova Scotia called Little Putt Mini Golf. John and Peggy eventually sold the business and moved to Bedford. A few years after Peggy passed away, John moved to the Annapolis Valley region and spent the last 27 years of his life there. John worked for Avon Valley Greenhouses until his retirement. This position gave him the opportunity to travel throughout the Atlantic Provinces and the Gaspe Peninsula. John loved his customers and considered them friends. John lived his last years in Berwick and was happy spending his time with Ena. They loved going for long drives, often down the shore, which was a favorite spot of his. John was a member of St. Anthony’s Catholic Church in Berwick and while he was able, he enjoyed singing in the men’s choir. John had many interests. He was a jack of all trades and could turn his hand to anything. He was always building or creating something with impeccable detail. John was also a devoted and much-loved Boy Scout Leader. He helped organize and took his Troop to the World Jamboree held in Quebec in 1970. He loved camping and spending time at our summer cottage which he built. John was an avid fisherman. He would get his friends together for long weekend camping and fishing trips. He started an ice-fishing club and enjoyed organizing and participating in ice-fishing tournaments...fishing was his passion. Dad also enjoyed bowling, playing cards with friends, puzzles and crosswords. The family would like to thank the staff on the Wallace Unit at Dykeland Lodge in Windsor for their exceptional care and kindness shown to dad while he was a resident there. A committal service will be planned for a later date and will take place in Sydney. Online condolences to: www.harboursidecremation.ca Family Like branches on a tree we all grow in different directions, yet our roots remain as one. More Obituaries

With great love and profound sadness, we announce the passing of John Betuik. John was born July 29, 1931, and passed away at age 90 on February 24, 2022 in Dykeland Lodge in Windsor. John was predeceased in by his wife of 40 years, Peggy (Rutledge)... View Obituary & Service Information

The family of John Betuik created this Life Tributes page to make it easy to share your memories.

With great love and profound sadness, we announce the passing...

Send flowers to the Betuik family.