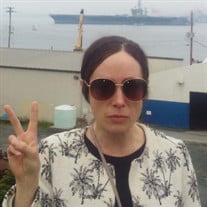 With great sadness, we announce the death of Lisa Marilyn Faber, age 48, of Halifax, Nova Scotia. She spent her early years in Kippen, Ontario, on her parent's cattle/sheep farm, helping with the daily chores and raising the animals. She mentioned when she was 6 or 7 feeding the sheep, one of the sheep didn't like her being around, and it charged her and knocked her over; that was something she always laughed about. Lisa also enjoyed great figure skating success with the Hensall figure skating club, always skating above her age level and winning many awards and competitions. After graduating high school in Clinton, Ontario, she applied and was accepted to the University of Western in London, Ontario; while attending school, she continued to skate and taught skating to kids. After completing a couple of years at University, she decided to try something different. Lisa attended truck driving school, and became a long-haul truck driver. She spent many hours driving across the states, which allowed her to pursue her love of traveling. Lisa always mentioned how nice it was to wait for the trailer for the return trip in places like Laredo, Texas, and San Diego, California. After doing this for a couple of years, she decided she had enough of this job and decided to go back to University. While attending University, she decided to become a fur baby parent and adopt a Chihuahua named Bambolina. While working at a job at Securicor Armoured Transport, she met her best friend and love of her life, Jeff; they were meant to be together. Shortly after meeting, Jeff was offered a job with the Navy in Victoria, British Columbia so they packed up their things and the Chihuahua and went to BC. While on the island, Lisa attended the University of Victoria and enjoyed traveling and exploring the many hiking trails. After a few years on the island, Jeff got posted to the east coast. Upon arriving in Halifax, Lisa and Jeff found a property that they loved on Prince Edward Island; after purchasing this property, she enjoyed endless hours of gardening and renovating, and making improvements. There were also many interactions with wildlife on this property; she found an orphaned raccoon lovingly called Ben and raised him to the point where he could be released back into nature. While on the east coast, Lisa enjoyed her yearly camping trips to Cape Breton with Jeff and Bambolina. She enjoyed hiking the various trails and going swimming at Ingonish Beach. In recent years Lisa purchased a property in Halifax that she enjoyed renovating. Lisa is survived and will be deeply missed by her loving spouse of 19 years Jeff Ripley of Halifax NS, Brother; Kevin Faber of Goderich ON, Brother; Darren Faber and Sister-in-law; Cheryl Faber of Gravenhurst ON, Sister; Lori Burt, and Brother-in-law; Ron Burt of Bayfield ON. Nieces and Nephews; Kristopher Faber and Jacqui Mueller( Faber), Carter and Sierra Burt. Predeceased by her parents Marilyn and Ross Faber Cremation has already taken place. Messages to the family can be placed at https://www.harboursidecremation.ca/ There will be no funeral service as per Lisa's wishes. There will be a celebration of life held at a later date for close family members. Donations in Lisa's Memory may be made to Hope for Wildlife at www.hopeforwildlife.net

With great sadness, we announce the death of Lisa Marilyn Faber, age 48, of Halifax, Nova Scotia. She spent her early years in Kippen, Ontario, on her parent's cattle/sheep farm, helping with the daily chores and raising the animals. She mentioned... View Obituary & Service Information

The family of Lisa Marilyn Faber created this Life Tributes page to make it easy to share your memories.

With great sadness, we announce the death of Lisa Marilyn Faber,...

Send flowers to the Faber family.