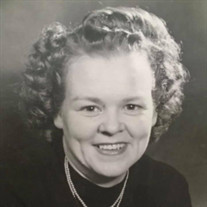 It is with heavy hearts that we share the news that Mary passed away peacefully on Wednesday August 11, 2021 at Hospice Halifax. She was the wife of George Orville Neville, and mother to Shirley (Jim Miller) Dartmouth, Murray of Pictou, Chari (Jim Pilla) Dartmouth and Denyse (Vikram Venugopal) of Dartmouth. She was a loving Grand-mother to Karyn Jourdeuil (Kevin Schleich) Virginia, and Lyndsay Bruce (Lower Sackville). She has one remaining sibling Jean West of Fredericton, at the young age of 94. Mary was born in Fox River, NS and attended school in Advocate Harbour. She moved to Pictou, NS where she met and married Orville. She worked at the Telephone Company as a switchboard operator, the Royal Bank of Canada as a teller, and many years at the Edward Mortimer Place. Mary had a fantastic sense of humour and could tell a story with a single eye roll. She was very tech savvy for her age embracing cell phones, iPads, Facebook, and FaceTime. She was a great bowler and golfer and spent many days at the Pictou Golf Club. Mary gave of herself in many ways. Being the universal blood donor, she gave frequently, until they refused to take it any longer. She did volunteer work and was awarded a 70 year pin through the IOOF Rebecca Lodge in Pictou where she held several positions including Noble Grand. She was a very active Kinette with the PIctou Kinsmen and Kinette Club. She moved to Dartmouth, NS to help care for her Grand-daughter Karyn and stayed in Dartmouth for the remainder of her years. She loved kids and pets but especially her “darlin” Lucy Jean, a white toy poodle, who also passed away this year at the age of 17. Mary spent many a day on a beach with her kids, three of whom became swimming instructors, although she did not swim herself. She was the “lifeguard extraordinaire” for the youth of PIctou. She loved to travel with her kids to many different places with their military postings. She preferred country music and could be heard asking Alexa to play a particular piece for her. Alexa was a good friend if the house was empty and will no doubt get a well deserved rest due to her passing. She was a very avid crossword puzzle solver, doing them daily until her final day. She could solve cryptoquotes in a heart beat as well the word unscramblers and Lexicons. She did her best to make it to the Queen’s scroll but stopped just shy of that 100 year mark. We would like to take this opportunity to thank the staff of the Halifax Hospice for their tender loving care of our Mom in her final weeks. In lieu of flowers, a donation to the Halifax Hospice would be greatly appreciated. They do an exceptional job of caring for their residents in the final stages of life. They even fulfilled her request of making sure she left head first as she was adamant she was not leaving feet first! Cremation has taken place. Internment of ashes and a celebration of life will occur at a later date. Rest In Peace Mom until we meet again…..we all love you dearly and will miss you terribly.

It is with heavy hearts that we share the news that Mary passed away peacefully on Wednesday August 11, 2021 at Hospice Halifax. She was the wife of George Orville Neville, and mother to Shirley (Jim Miller) Dartmouth, Murray of Pictou, Chari... View Obituary & Service Information

It is with heavy hearts that we share the news that Mary passed...

Send flowers to the Neville family.