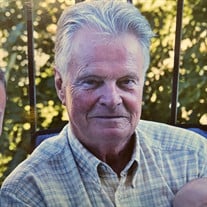 Peter was born in Galt Ontario, very appropriately on April Fools Day 1940 to James (Kingstown Ireland) and Elizabeth/Bessie Ewing (Westport) but by the time Peter became a full blown trouble maker (age 12), they relocated their family to Nova Scotia. Peter is survived by his brothers Kevin and Brian, his first wife Alexa, his current overly accepting and forever patient wife Suzanne, his two verbal punching bag sons -- Justin (Heather) and Travis (Margaret), his step daughter Susie, and his nine loving grandkids, AKA the nippers. In preparation for the next ice age, Peter also left behind 875 rolls of toilet paper, 400 boxes of Kleenex and 300 bars of soap all stashed in the basement in his favorite place on earth -- Fox Harb'r. Proud of his Irish heritage, Peter somehow lacked both dancing and / or music skills but made up for that by inheriting an extra affinity for Irish whisky and Guinness. If there was a Hall of Fame for trash talkers Peter would top the list. He was the self-crowned Muhammad Ali of verbal sparring. Nobody knew this better than his golfing buddies who were the frequent casualties of his razor-sharp humour and mental acuity. Peter's version of Wally's World, otherwise known as the family home, hosted dozens of children from all over the city. Sleepovers, basketball games in the driveway, NFL in the living room. Peter was in his element when surrounded by the anarchy and energy of pimple-faced teenagers. Peter was a terrific athletic supporter. He loved Dalhousie sports and boxing matches, especially when he wasn’t directly involved. Peter’s idea of technology was a Texas Instruments calculator. He was an expert at burning a steak and nobody could massacre a rendition of ‘Dark Island’ better than Peter. He could make Denis Ryan weep at the noise. Peter single-handedly kept both the local Canadian Tire and Costco stores in business by his fascination with deal hunting. The only thing bigger than Peter’s whiskey collection was his collection of air fresheners and obscure BBQ parts. Peter was a storyteller and a jokester like no other. He loved talking with everybody, whether with the guys at the gas station or with Sidney Poitier. After his third glass of white wine at a party, look out. Peter had never heard the term ‘pulling punches.’ Peter’s dashing looks, youthful energy and magnanimous personality allowed him to deflect any label of ‘old man.’ He saw himself as a combination of Benjamin Button and Clint Eastwood. One old bartender in Lahinch thought of him as “Halifax’s oldest living teenager.” Peter had the attention span of a mosquito on crystal meth and the patience of a Rottweiler with rabies. Nevertheless, he served the board of Halifax International Airport with distinction and, by the time he was done, he actually thought he knew how the baggage carousels worked. Don’t mistake Peter’s modesty for a lack of confidence. He would win a stare down against Connor McGregor......but just not tell anyone about it. And, as his colleagues at McInnes Cooper, where he practiced law for half a century, will say, only the unwise lawyer would ever under-rate his wisdom or his wit. Those were fatal mistakes for the other side. He loved golfing with his buddies, salmon fishing on the Upsalquitch (although we don’t believe he actually caught a fish in over 30 years) and, more than anything, family meals and a Saturday visit with his kids and grandkids Peter thoroughly enjoyed spending time at the YMCA however after 25 years of monopolizing the steam room, they had to tear it down to finally get rid of them. The only thing Peter loved more than his own jokes were his nine grandkids, each with a nickname that Peter bestowed. And the only thing Peter hated more than tomatoes and compliments (both of which would cause him to break out into a full-blown rash) were funerals and obituaries. He’ll get his wish on the former, but not on the latter. When Peter asked, ‘How are you doing?’, he actually meant it. He genuinely wanted to know. This was not a rhetorical question in his mind. He listened because he wanted to understand, not just to respond. That said, he sometimes responded with sarcasm. Peter's emotions were more complicated than a 20-sided Rubik's Cube but the one feeling that he wore on his sleeve was his love for his family, and especially for Suzanne, his wife of 30 years. She was the one person who was spared from his witty verbal jousting. Nobody was a better cook in his mind, not even, his previous favorite, Colonel Sanders. Although Peter was not a fan of hospitals, we know he would have thought differently after the incredible care he received in the regional hospital in Truro, and especially the empathic and professional folks in the ICU department If you're thinking of sending flowers, Peter would prefer that you donate to Special Olympics, Dalhousie, or a charity important to you. Peter would also be happy if you went to your local booze store and bought a nice bottle of whisky to be split with your 10 closest friends. Funeral Arrangements entrusted to Harbourside Regional Crematorium www.harboursidecremation.ca/

At Peters request, please In Lieu of Flowers donate to the Special Olympics, Dalhousie, or a charity of choice

Send flowers to the McDonough family.