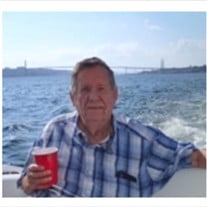 It is with great sadness that we announce the sudden passing of our father, Bob, on Saturday, September 11th , 2021 Dad was born on October 26th, 1932 in Berwick Nova Scotia, the eldest child of the late Raymond and Greta (Shaw) Johnson. He is survived by sister, Marilyn (Gerry) (Ottawa), brother Greg (Leanne) (Lombardy, Ontario), sons David (Sandra), Robert (Cathy) and Jim (Karen) all of Dartmouth, grandchildren Jeanette (Eric), Michael, Alexa and Matthew, great grandchild Isabel, and many nieces, nephews and cousins. He was predeceased by our loving mother, Catherine (Arnold), second wife , Mildred Jane Johnson and recently, his third wife, “Miss” Margaret Alexander. Dad was also predeceased by his Grandson, Robbie . Dad earned his pilot’s license through the Halifax branch of the Royal Canadian Air Cadets and soon after entered the Royal Canadian Air Force, eventually rising to Chief Flying Officer in Petawawa, Ontario. He later enjoyed flying for Trans Canada Airways and Air Canada. The lure of friends and relatives on the East Coast led us to leave Ontario and return to Nova Scotia. Dad started here as the chief pilot for Air Atlantic and later enjoyed a career with L.E.Shaw Ltd, where he held a number of positions including Sales Manager for Clayton Developments first big housing project, Colby Village. Dad was inquisitive about life in general and had a number of hobbies that he enjoyed aside from aviation, including sailing, music, computers, photography, and electronic kit building.He also volunteered for the Dartmouth Air Cadets for a number of years. Dad had a youthful, mischievous nature, a quality that lasted throughout his 88 years. We tried to ensure he received as good as he gave. We would take great delight in teasing him by recalling close calls (that weren’t there) when he took us flying or boating. One of our favourites was dismissing his claim that he played a role in a movie with a young William (Star Trek) Shatner when he was in the Air Force. “No film, no proof” we said. Dad took the bait and made it his mission to track down a copy, which he did months later, through the NFB archives. He delighted in screening it for us one day when we arrived home from school. Many thanks to Bob's nephew Scott who recently painstakingly researched and found a copy of the William Shatner Movie. Years later when he brought the subject up again we all denied ever seeing it. Of all the things he loved doing, none topped getting together with family and friends. He would look forward to such gatherings and always exclaimed after how great the occasions were. Cremation has taken place. Messages to the family can be placed at www.harboursidecremation.ca A private family service will be held at a later date per Dad’s wishes. Donations in Dad’s Memory may be made to Children’s Wish, Hospice Halifax, or charity of choice.

It is with great sadness that we announce the sudden passing of our father, Bob, on Saturday, September 11th , 2021 Dad was born on October 26th, 1932 in Berwick Nova Scotia, the eldest child of the late Raymond and Greta (Shaw) Johnson. He... View Obituary & Service Information

The family of Robert Douglas Johnson created this Life Tributes page to make it easy to share your memories.

It is with great sadness that we announce the sudden passing...

Send flowers to the Johnson family.