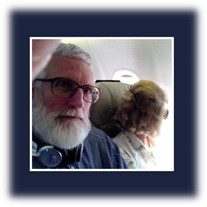 Ronald (Ron) Steven Hoffman sailed away to the Great Beyond on Saturday, November 13, 2021. Born in Corsicana, Texas on February 19, 1946. Ron grew up in Aurora, Colorado where he attended Central High School, led the marching band as the drum major and established one of the school’s first folk music trios. After a B.A. in Psychology at The Colorado College in Colorado Springs, he moved to Nova Scotia to pursue his Master’s in Psychology at Dalhousie University in 1968. He was a Senior Instructor in Psychology at Dalhousie University from 1980-2008. His early and self-educated fascination with computers, especially Macs, and video editing led to a unique position in the Psych Department that grew to be so valuable that, when he applied for a position at another university, one of his referees from Dal wrote a glowing letter that ended with the express hope that he wouldn’t take the offer if extended. The University sent him to several technology conventions in the US over the years, where his mission was to review and recommend to Dal any new computer products which he deemed to be of use. He received accolades from both undergraduate and graduate students for whom he went far above and beyond. He required the highest standards of his students, as he always did of himself, and while this sometimes meant crossing swords with them, he was widely respected and admired. He was also active in the Dalhousie Faculty Union for many years and helped negotiate the University’s first collective bargaining agreement. Ron retired from academia to pursue his interests in sailing, music, travel, fine food and wine. He devoted considerable time to teaching, writing, and editing manuals on boating safety with the Canadian Power and Sail Squadron, of which he was a lifetime member. For many years, including this one, Ron and Carol sailed around Nova Scotia, on a succession of fine boats which they owned. He and Carol also travelled extensively. They took several voyages with friends in the Caribbean, on bareboat charters where Ron was always the chosen captain: in fact, his deep boating expertise led to the boat charter company he used eventually designating him with their “Commodore” rank (which meant, to his delight, that he and his crew were given special rates on later charters). During his last sabbatical, Ron and Carol visited his sister Barbara and her husband, Michael, in Kenya. In later years, the four of them travelled to France multiple times. One especially memorable trip, shared with four other close friends along with Barbara and Michael, was a week spent on a canal boat travelling down the Canal du Midi in Southern France, where Captain Ron motored the big vessel 157 km through 64 locks and one very narrow tunnel. The very first lock they encountered was particularly tricky and cramped. Ron had carefully organized his amateur crew and after he put the big boat through its paces and motored easily out of the lock, the lock-keeper came out of his house and called to him ‘Ah, c’est impeccable!’ That remained his crew’s watchword for their captain throughout the trip and became the title of the photo book he edited afterward. Ron also took great joy in music, particularly bluegrass, pop and folk. He was a gifted singer and guitar player in several groups over the years, most recently heading up the legendary 9-member Tuesday Night Band, which, since the pandemic began, meets online every Thursday afternoon thanks to Ron’s computer expertise. His bandmates loved him dearly and deeply miss his wonderful 12-string guitar leads and his warm, true voice. His humour, kindness, and generosity of spirit will be remembered by all who knew him. Ron is survived by his wife and best friend of 51 years, Carol Anderson, his sister Barbara Hoffman and his older brother Rick Hoffman, as well as his beloved little tabby cat Vicki and numerous close, long-term friends, colleagues, and former students. The family requests that any memorial donations be sent to The Red Cross or the Canadian Cancer Society

Ronald (Ron) Steven Hoffman sailed away to the Great Beyond on Saturday, November 13, 2021. Born in Corsicana, Texas on February 19, 1946. Ron grew up in Aurora, Colorado where he attended Central High School, led the marching band as the drum... View Obituary & Service Information

The family of Ronald Steven Hoffman created this Life Tributes page to make it easy to share your memories.

Ronald (Ron) Steven Hoffman sailed away to the Great Beyond on...

Send flowers to the Hoffman family.